Our Family Work with us 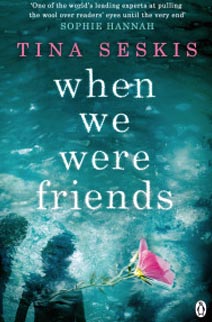 It had always been the six of us.

Since we met at university twenty-five years ago, we’d faced everything together. Break-ups and marriages, motherhood and death. We were closer than sisters; the edges of our lives bled into each other.

But that was before the night of the reunion. The night of exposed secrets and jagged accusations. The night when everything changed. And then we were five.

When we were friends is a novel that is both gripping and full of suspense, this is Tina Seskis’ second novel since her debut One Step Beyond, which having read When We Were Friends has now made its way onto my TBR pile. This woman can write!

Flitting from past to present When We Were Friends follows six friends who met 25 years ago at university in Bristol. Sissy, Renee, Natasha, Juliette, Camilla and Siobhan have a traditional annual get together although 25 years on they’re most certainly not the friends they were in their student days. Each of them is at different stage in their lives and this years annual picnic is far from fun, emotions are high and lead to a turn in events that nobody is expecting. Only five will leave this reunion alive.

Tina’s writing had me sucked into the lives of these women as the past is dug up piece by piece, secrets kept from a summer spent in Ohio to shocking affairs taking place in the present day it’s no wonder these ladies are struggling to keep their friendship together.

It’s unusual for me not to have one solid favourite character throughout a book, but I simply couldn’t choose between these leading ladies, they each have so many good traits as well as the down right annoying. Siobhan had to be my least favourite overall, especially in the present day as she is rather whiney and possibly has the least to moan about, where Sissy has a lot to moan about yet keeps herself rather calm and collected throughout. Each stage of their lives come with so many different obstacles that I found myself both loving and loathing each character at some stage.

When We Were Friends is both dramatic and thrilling, a gripping novel that is jam packed full of suspense. It’s a thrilling drama from affairs, deaths, marriages and more this book didn’t disappoint, a perfect read to get lost in.

I was totally invested in this novel from start to finish, at no point could I say who wouldn’t be leaving the big reunion alive or how any events in the novel would unfold. I’d certainly recommend it to others.

The winners of our When We Were Friends give away have been drawn, congratulations!

When We Were Friends is available for purchase on the 23rd of April, online and in-stores.