Our Family Work with us

Having lived in our new home for almost 2 years now I decided to bite the bullet and put paint on the walls, starting with the nursery!

Harriet will move into her room soon so I’d like to do something with it before she does. If you follow my column in Progressive Preschool magazine you may know I have a real love-hate relationship with her nursery furniture. If I could replace it and give hers to charity, I would.  The nursery furniture used to be Taylors, It’s a dark walnut wood, which I have grown to dislike. I consider painting it most weeks but chicken out in fear of making it worse.

So, I’ve taken the plunge. Today I put paint swatches on the wall. I then proceeded to play furniture Tetris, again. To no avail. The dream would be to be rid of the changing table all together now she’s bigger, but I’d still need drawers for her clothes.

A wardrobe with drawers would be the dream for this small space. And a beautiful nursing chair.

So,  although it’s not the end of the world not being able to create the room I want for a baby who won’t even care. I can still dream. And dream I will. I’ve even put together a mood board of what my dream nursery for Dolly would consist of. I started this whilst pregnant so I may as well share it with you! 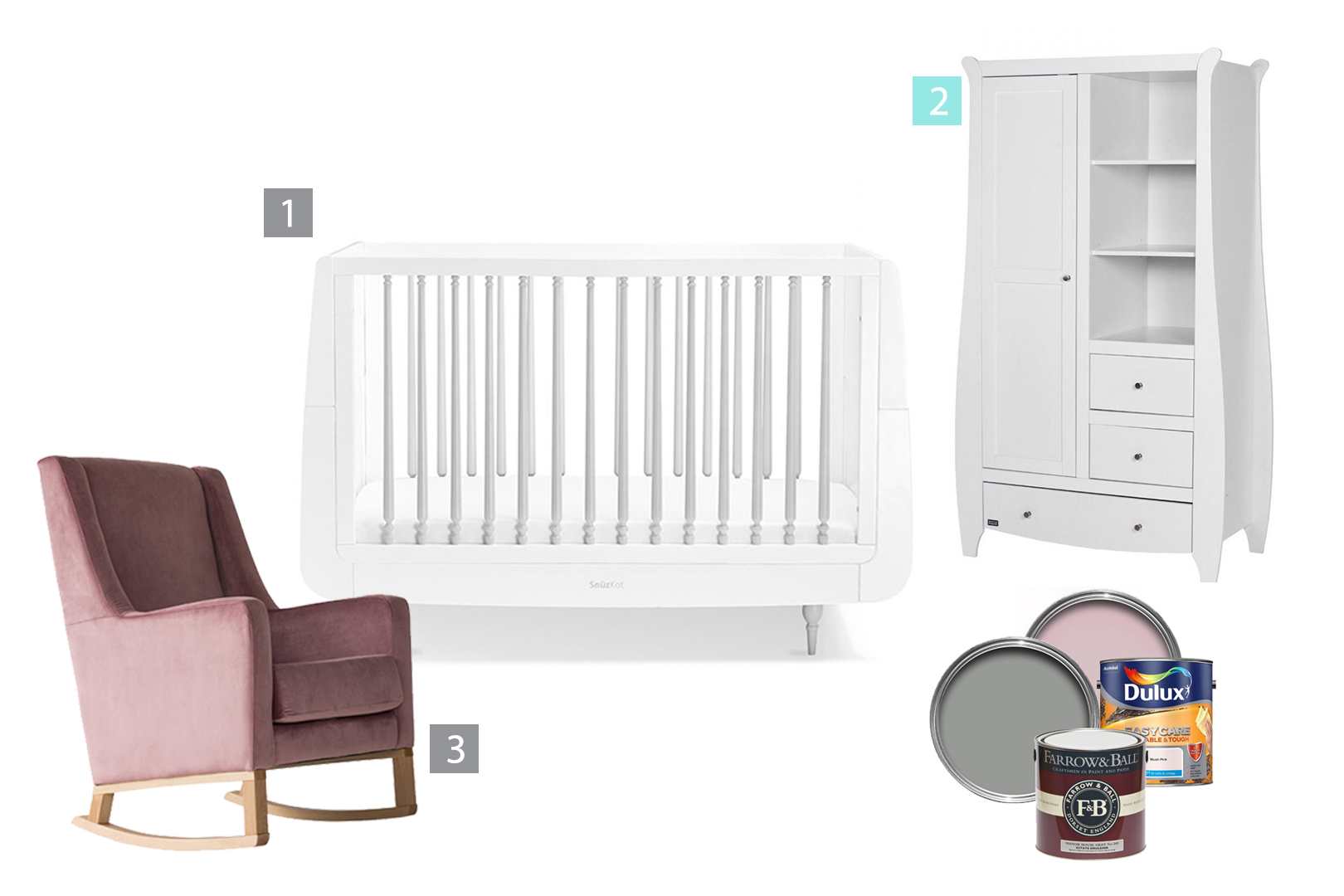 As huge fans of the snuzpod, it didn’t take much for me to fall for its big brother the Snuzkot. We bought our Snuzpod almost 4 years ago now whilst I was pregnant with Taylor. He slept in it for 8 months and now Harriet sleeps in the same one. It’s stood the test of time and 4 house moves. I can only imagine the Snuzkot is of the same supreme quality. It’s also a cot bed which will last for years to come.

And, it’s stunning. Have you seen those spindles? It’s the sort of cot you’d keep, for the grand babies!

Instead of a change table, I’d pair the snuzkot with the Tutti Bambini Lucas wardrobe. So you still have drawers for clothes, but a hanging space for all those little dresses she’s already accumulated. You get the best of both worlds. Also, cute little shelves!

As much as I championed a changing table in my first pregnancy I soon learnt people were right. I should have listened, you don’t use it a whole heap and they soon start rolling around!

Having had a traditional glider with Taylor for those long night feeds, a bargain for £20 on Facebook at the time, I know how important having a nice place to sit is. Especially once they’re in their own room and you’re no longer scooping them up from beside you. I breastfed Taylor for 2.5 years, we wore that chair in and then some until it broke.

Nursing chairs have since moved up in the world. Although the traditional glider is still at large. There are now beautiful armchair rockers on the market. Baby Grey, Teddy One and Olli Ella all offer stunning armchairs that any mother would happily curl up in with their newborn. The Nelli from Baby Grey is a nice petite option and would be perfect for the space we have.

Throw in some accessories like those above and you have the perfect space to last a little lady for quite some time!

And that’s it, my dream nursery space would consist of these gems. With blush pink and pale grey walls, gold polka dots and a little bookcase. Do you think the man would notice if the current furniture accidentally fell apart or found it’s way to charity? 😂